When Jenn was done taking the show floor by storm, we were able to grab some relatively close seats for the opening General Session.

Marquis Laughlin and Joe Castillo are both amazing, and I have decided that from a distance I like the music of Flatfoot 56. Because we needed to gain some distance to enjoy them, we sort of lost of our seats to listen to Andy Stanley and Jenn and I ended up sitting together at the tables near the exhibit hall to just relax until the general session ended and our afternoon seminars began.

Unbeknownst to us, Gavin busted us skipping the speaker. I found this in his Flikr set this morning. 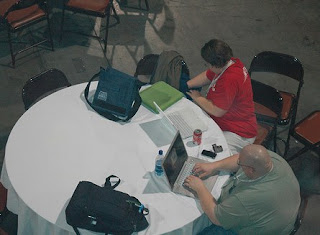 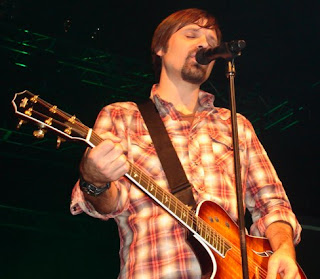 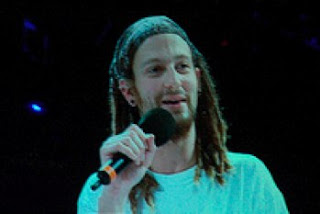 eli, i think that is a great framework to understand what shane did. it was tough to hear to sit through and yet, it was meaningful and the first time i had ever heard the whole sermon. no processing, no sectioning off.. a friend of mine got a seat the session for her 19 yr old daughter as her birthday present (which was yesterday, and seeing shane was something she asked for and drove from knoxville to see/hear/experience). i thought of her after the session, did she feel cheated that he didn't speak? i caught up with her today and asked, "what'd you think?" her face lit up "awesome!" "how bold of someone to share like that!" nice discourse ensued after that.

to comment on the paid thing. i would continue to go to my church. however, i am conflicted as i pass by a fellow united methodist church (my denom) at least two or three times daily, it's two or three blocks from my house & i feel as though it'd be a shame to not develop a relationship with that church.