By the time we made it back to the hotel last night we had been going for nineteen hours on six hours of sleep... I was beyond the point of coherence...

Thankfully I took notes to myself on and off throughout the day yesterday because it was too good of a day to not cover in detail.

Jenn's HerStory session went until noonish yesterday, and I was able to spend most of that time just relaxing and lying low at the convention... I walked around the show floor for a little bit, read more in detail about some of the sessions I was planning to attend, and did email and read blogs until about 11:30.

Around 11:45 I had an awesome opportunity to sit down and have lunch with Marko. I've said many times, here on the blog, and in person how much I appreciate Youth Specialties and the work they do to encourage, empower, and equip youth pastors to be more effective in their ministries. And even though I'm a volunteer youth leader in a small church in a small town and may never be a "heavy hitter" in the world of Youth Ministry... it is really cool to be able to come to the conventions and make connections with folks who do wield the big guns in our field...

I really tried to not have an agenda when Marko and we got together because I really just wanted to chat and hang out with him. I know he's been checking blogs on and off throughout the weekend, so if he pops over here hopefully he can confirm that I wasn't a blithering idiot... ( or if I was a blithering idiot, maybe he'll cut me a break since he's famous and probably has to deal with blithering idiots all the time ).

Anyhoo... Had a great lunch just talking and sharing and hanging out. Thanks dude!

Oh... Also as we were wrapping up, I snapped this shot of Marko across the table. I didn't put him up to this, I promise. 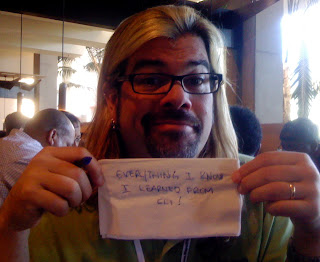 Also as we were breaking up Gavin wandered by with his camera handy and snapped a photo of Marko and I with Carol, another youth worker blogging from the convention. 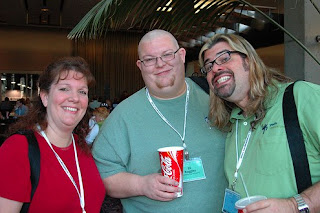 To make this whole situation funnier, when I did meet back up with Jenn on the show floor later she had stopped at some booth where they were custom carving those rubber bracelet things. I have a couple on my keychain for GeoCaching and other things, and she had thoughtfully had one made for me to add to my collection.

I feel like this post is getting long, so I'm going to break it up... More next coming soon...
Posted by Roogles at 12:41 PM