Today was the first day of the National Youthworkers Convention here in Pittsburgh, PA.

I am working the show this time around, helping to run the booth for LiveWorship Software, which a few cool guys I know came up with back in the day...

Alan and I started the morning bright and early by attending some company mandated identity theft training, which we had both previously missed and had to have by law.

It was interesting and informative...

We then proceeded with some crazy gathering up of things, packing (read cramming) the van and split Chillicothe for the great state of Pennsylvania.

Two Sam's Club's, one Olive Garden, one gas station, and a few hours later we were pulling into the David L. Lawrence Convention Center here in Pittsburgh.

It took us a couple of hours to setup the booth, then Alan and I grabbed some dinner at August Henry's across the street from the hotel. I had an amazing pepperoni and cheese stromboli. Amazing I tell you.

The show floor was open from 8:30 - 10:30 pm. Traffic for us was pretty slow, but we did have some good conversations. I love it when avid LiveWorship fans stop by the booth just to tell us they like our product.

Here is a (bad) photo of our booth this year. It looks much better in person, I promise. I will attempt to get better photos tomorrow. 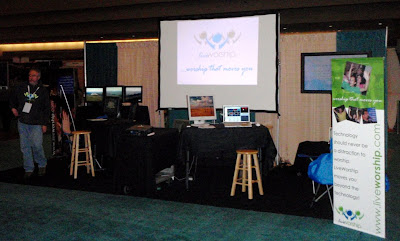 We are right across the aisle from Ugly Mug coffee, who has free samples of great available in their booth... This is either going to be very good for me, or very bad for me before the weekend is out.

While Marko was making his rounds on the show floor he stopped to say "Hey". Always great to run into him.

Looking forward to tracking down and catching up with quite a few more of my twitter friends tomorrow.

This morning as I was getting ready to pull out of the driveway for work I twittered (tweeted?) as I often do...

This afternoon Corrine (a fellow twitterer, blogger, and Third Day fan) fired this at me...

Here was the rest of our exchange... Thanks for calling me out Corrine! Made my day!

(ht to Corrine and Twitter)
Posted by Roogles at 12:32 PM No comments:

Look what the boy found...

Jenn left for water aerobics this evening, and I was in the kitchen fixing some dinner...

Ellie was in the living room in my chair, and Silas was wondering around the house playing with toys, talking to me, and trying to sneak snacks out of the pantry...

Silas started to make a commotion in the kitchen right in front of the sink and when I turned to him he had a lethargic field mouse cornered up against the counter. 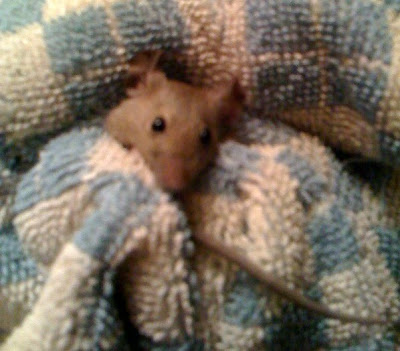 Not sure why a mouse would be wandering around in plain sight in the kitchen I grabbed it with a dish towel.

My best guess is that the mouse had been into some D-CON mouse goodies which were stashed back underneath the kitchen sink and was so far gone that he wandered out into the kitchen...

I let Ellie & Silas get a good look at him and then took him outside for a boost up to mouse heaven.

I have no idea what this actually means...

Fellow tweeps. What is your tweet worth?
Posted by Roogles at 8:30 AM 2 comments: