A survey about books.

This has been going around, and although I wasn't actually tagged on this post, I saw it over on pomomusings and have been meaning to post my own answers for a couple of days.

I am a voracious reader. In general I read seven to ten books a month.

That being said, I just couldn't pass this one up.

1. One book that changed your life

I think that most of the people who know me well won't be surprised by this answer, even though it is a little odd...

I'd say that the book that most changed my life is probably The Hitchiker's Guide to the Galaxy by Douglas Adams.

I became fanatical ( obsessed, even ) with this book early in high school and probably read it cover to cover hundreds of times between my freshman year and graduation. It was defining for my sense of humour, my vocabulary, my interests, and many of my friendships.

My original copy of Hitchiker's, I gave to a great friend in 1996 knowing that I would never see him again, and wanting to have something to remember me by. I had basically taken the book everywhere with me for three years, and knowing what it meant to me, he was very reluctant to take it, but did in the end. My replacement copy ( shown below ) has been on my shelf since 1997, and I still read it cover to cover about twice a year. 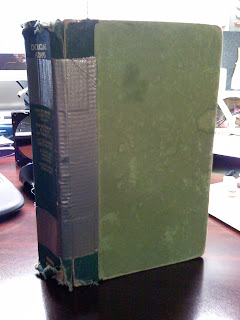 If I had to answer this question twice my next answer would be Velvit Elvis by Rob Bell.

2. One book you’ve read more than once

I almost always re-read books that I liked the on the first read. There are certain books though that I make a point to re-read at least once a year ( or so ).

Just a couple of these include Hitchiker's ( of course ) and The Lord of the Rings Trilogy by J.R.R. Tolkien.

3. One book you’d want on a desert island

I so want to say The Bible... and ( like Adam ) I would say The Bible if I KNEW I'd be getting off the island at some point... the forced reading would be good for me...

However, if I were stuck on the island permanently I'd rather have something distracting to read than something I'd have to think about...

4. Two books that made you laugh

Lamb by Chris Moore. One of my new favorite books.

The Areas of My Expertise by John Hodgman.

5. One book that made you cry

When we were kids, instead of watching TV in the evenings, Dad would read out loud to my brother and sister and I while we sat around on the floor. Dad collects books about Robin Hood, and one of his favorites is Robin Hood by Henry Gilbert, published in 1912.

Every time he read it out loud to us, and even when I went back and read it myself in later years, I always cried at the end when Robin Hood dies.

6. One book you wish had been written

How do you answer this question? I guess I'm not sure what the book would be about, but I feel strongly that the following people should write books. I would buy one.

7. One book you wish had never been written

Again, I find this question horribly unfair... I'm no where close to having read all the books in the world and am therefore unqualified to say that some books should never have been written...

Also, I'm having a hard time thinking of any books I've read that I absolutely just hated...

I'm pretty open to the freedom of thinking and freedom of expression thing too... So even if I don't like a book, or don't agree with the content there-in I'm not sure I would go so far as to say that it should never have been written...

I am currently reading I, Strahd - The Memoirs of a Vampire by P.N. Elrod and They Like Jesus but Not the Church by Dan Kimball.

9. One book you’ve been meaning to read

I have several friends and blog-quaintances who have written or published books that I've been meaning to order and read, but not gotten around to yet.

My friend Kevin Pettway writes a web comic called Heros of Lesser Earth. He published a book of his comics in the fall of last year, that I wish I had grabbed a copy of.

Gordon Atkinson of RealLivePreacher.com also has a book published that I would like to pick up and read.

As for the customary tagging, I am interested in seeing the following folks respond:
Marty, Steve, Sarah, Jenn, Anna, Julie P and Tersie
Posted by Roogles at 10:39 AM 3 comments:

So... I was feeling artistic and wrote a haiku this morning... actually, after some research it appears that I actually wrote a senryū.

Anyway. Here is it is for your enjoyment.

good for taking notes
reminders, to-do's, doodles
my thanks to 3M

To be truly appreciated, this particular haiku must be presented on the medium to which it refers... So I give you a photo. 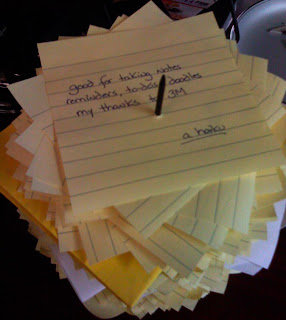 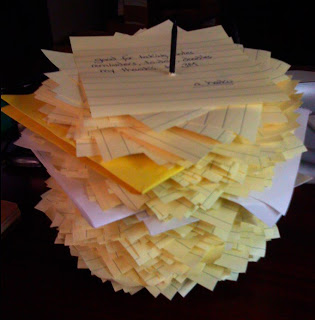 Almost time to clean off the pike again...
Posted by Roogles at 11:08 AM 2 comments:

As Dangerous as the Law Allows!

Well, I'm in San Francisco for Macworld. ( more on that later, probably ).

Today after we got our booth setup, we had basically the whole day to wander around and be tourists in San Francisco.

Whilst we were out wandering around, we scoped out Pier 39 down at Fisherman's Wharf.
( Think medium sized, sprawling, tourist trap mall on a pier... )

Snapped a photo of this sign while we were there, which brings up some of the following questions... 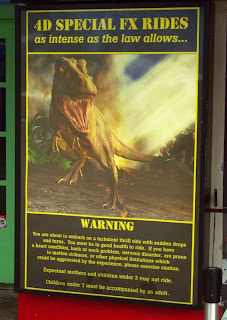 Just how "intense" does the law allow an amusement ride/attraction to be?

4D ?? What the heck ? Please read this... Wikipedia : Fourth Dimension

Needless to say we passed on that one...