While in Toronto with Youthworks, my work crew spent three of our four days on site at a ministry in Parkdale called St. Francis Table.

St. Francis Table is a restaurant dedicated to providing meals and a welcoming environment for the needy of our community. Patrons receive full restaurant service while seated at tables. For one dollar, they are presented with a meal, a hot and cold beverage, and a desert.

St. Francis Table is run by Brother John Frampton, a Franciscan Monk of the Capucin Order, and also has two employees, Dominic and Sam, who are both cooks at the restaurant. All of the other "staff" are volunteers who come in to help prepare the meals, wait tables, carry dishes, work in the kitchen, and clean up afterwards.

It takes at least twelve people to make one meal service possible, and Brother John keeps a running list of volunteers who come in to make sure the restaurant is able to maintain the nine meals per week served at St. Francis Table.

In the event that there aren't enough volunteers to make a meal service possible, then the food is prepared and passed out at the door ("to go" style) for $1.

Brother John explained to us, that the one dollar donation for the meal is not only to help the restaurant recoup some of it's expenses, but also to give the patrons a sense of dignity in that they have come to the restaurant and are purchasing their lunch as opposed to going to a soup kitchen or shelter and begging for lunch.

While my group was at St. Francis as part of our Youthworks trip, we arrived every day around 10 AM to help prepare, serve, and clean up after lunch.

Our day typically started by helping Sam and Dominic sort and prep the food for lunch, which typically included making a salad (in large quantity), making french fries, preparing the main dish (Italian sausage, pork chops, baked chicken, roasted pork loin, tuna fish sandwiches, etc), and prepping coffee and tea stations so that we could get hot drinks out to the patrons quickly.

While Sarah mastered the art of making fresh cut french fries en-mass, the rest of us became experts at chopping carrots, celery, onions, and lettuce for salads. 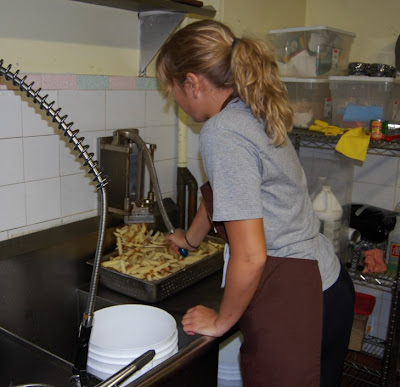 One day we packaged pork chops, pork loin, and chicken legs for going it the freezer, which turned out to be lots of fun. (Hey! Some folks just don't get to play with raw meat very often). 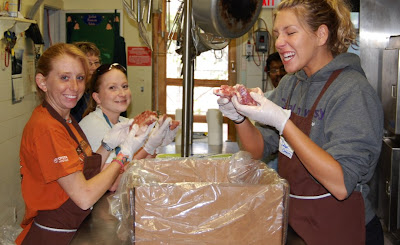 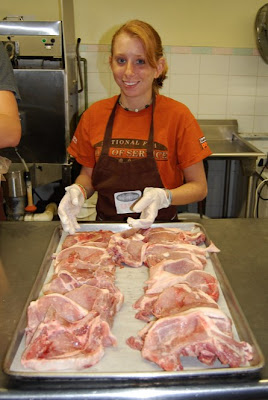 After lunch was prepped and ready, we divided up into group to either wait tables, bus dirty dishes, or prepare plates (to be taken out to the patrons). Brother John rotated us through these duties on a daily basis, so that everyone would get the experience of working in a certain place.

Just before noon, Brother John would gather us together for a group prayer after which he would give us the following pre-lunch pep talk...

May the Lord bless you for your service. Any problems, I'm the problem solver. You're here for a good time, I'm here for a long time. This is a recording. Beep.

Sometimes he would also throw out a word of caution about giving the patrons too much salt, pepper, cream, or sugar...

If the patrons ask for 16 packets of salt, just give them two... Sam does know CPR, but we would rather he not resort to using it.

Then he would walk to the front door of the restaurant, ring the bell to announce lunch service had started, and then the craziness ensued.

Having never waited on tables or worked in a restaurant before, the confusion of keeping track of what 8 (or 12) people wanted to eat and drink, how they took their coffee or tea, whether or not they wanted desert, and how many salt, pepper, and ketchup packets they were allowed to have was a little daunting to me (and, I think, to some of the students).

That being said... all of the kids did a great job of greeting people warmly, remembering their orders, keeping their smiles on (even when they were flustered), and taking the time to make real conversation with the patrons anytime the opportunity presented itself...

The one hour lunch rush seemed to move by so fast that it was a blur, and yet through the chaos we somehow managed to learn the names of many of the patrons, we learned who the regulars were, how they liked their coffee, and whether or not they could be trusted to stay out of the kitchen. Through all of the craziness, a handful of high school students from the states made real life connections with the homeless, the poor, the broken, and the marginalized people living in the Parkdale area of Toronto.

And let me tell you.... It might be one of the coolest things I have ever witnessed!

When brother John rang the bell to end lunch service at 1 PM, the volunteers were encouraged to go ahead and fix ourselves plates and eat before we began the clean up process to make the restaurant ready for the dinner crew. Often there were still patrons (typically the ones who had straggled in right before 1) finishing their meals and having quiet conversations. It was really cool to see the students pull up a chair to share a meal and conversation with these (often) gruff, ragged, old guys.

When the last patrons had moved out the door, we were left to wipe down the tables, get the dishes done and put away, and make our way back to the housing site.

It's hard to believe that three days serving lunch at St. Francis Table could make a deep and impacting change in someones life, yet as my own days return to "normal" and I sit through meetings, answer emails, and go about my day I've caught myself wondering in the mornings what Dominic has decided to fix for lunch today...

Whether the new Youthworks kids managed to cut the carrots up correctly on the first try, or had to do it again...

Will there be enough volunteers at St. Francis to serve dinner tonight, or will Brother John have to resort to take-out?

Did Mr. Kato manage to sneak an extra portion at lunch today after all the other patrons had gone, or did Sam chase him away?

Did Thomas and Louis eat together at table nine again today? Did they talk about American politics again, or have a more exciting conversation?

Will the guy from table eight on Thursday ever actually get to see the top of the CN tower, or will he continue to look for someone who will take him dancing on Friday nights at the top of the world?


Mother Theresa once said that "In this life we cannot do great things. We can only do small things with great love".

Our church's motto is that "Small things done with great love, will change the world"

I was blessed this week to watch God make a difference in the world.

One french fry, one pork chop, one plate, one conversation, one smile, one small thing at a time... small things, done with great love...

Five high school students, one sixty-three year old weight lifter from Springfield Illinois, and one youth pastor from Southern Ohio will never be the same.
Posted by Roogles at 3:05 PM