On shaving the yak. 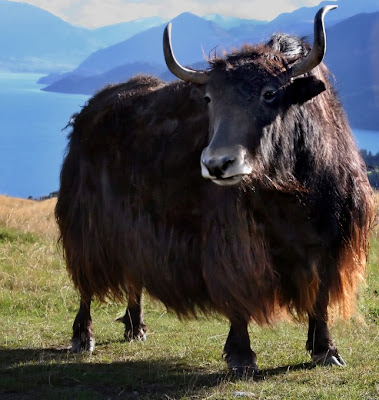 There is a chapter in one of my favorite books... I won't mention the name of the book here out of the simple desire to not have my solar plexus caved in by an atomic elbow...

Anyway, there is a chapter in one of my favorite books in which the two main characters, Joshua and Levi, are living in a monastery, and the abbot is giving them instructions and the following occurs...

"Monk Number Twenty-two," Gaspar said to Joshua, "you shall begin by learning how to sit."
"I can sit," I said.
"And you, Number Twenty-one, will shave the yak."
"That's just an expression, right?"
It wasn't.

A yak is an extremely large, extremely hairy, buffalolike animal with dangerous-looking black horns. If you've ever seen a water buffalo, imagine it wearing a full-body wig that drags the ground. Now sprinkle it with musk, manure, and sour milk: you've got yourself a yak...

The yak provided just enough milk and cheese to remind the monks that they didn't get enough milk and cheese from one yak for twenty-two monks. The animal also provided a long, course wool which needed to be harvested twice a year. This venerated duty, along with combing all the crap and grass and burrs out of the wool, fell to me. There's not much to know about yaks beyond that, except for one important fact that Gaspar felt I needed to learn through practice: yaks hate to be shaved."

So, that is where this whole thing started (for me at least)...

The dismissive to "shave the yak" became sort of inside joke among my close friends (especially the ones who are also fans of this book).

Conversations would end with telling one another to shave the yak, emails and notes would bear yak shaving dismissive, and more than one time I have advised someone to shave the yak when what I really meant was that I wanted to be left alone.

How was I to know that the phrase "to shave the yak" was not only in common use among computer geeks and technophiles, but that the phrase actually describes an activity in which I am almost a daily participant.

During a random google search a few weeks ago I discovered that The Urban Dictionary offers the following definition for yak shaving.

Seth Godin on his blog, expounded on the concept of yak shaving with this post...

I want to give you the non-technical definition, and as is my wont, broaden it a bit.

Yak Shaving is the last step of a series of steps that occurs when you find something you need to do. "I want to wax the car today."

"Oops, the hose is still broken from the winter. I'll need to buy a new one at Home Depot."

"But Home Depot is on the other side of the Tappan Zee bridge and getting there without my EZPass is miserable because of the tolls."

"But, wait! I could borrow my neighbor's EZPass..."

"Bob won't lend me his EZPass until I return the mooshi pillow my son borrowed, though."

"And we haven't returned it because some of the stuffing fell out and we need to get some yak hair to restuff it."

And the next thing you know, you're at the zoo, shaving a yak, all so you can wax your car.

This yak shaving phenomenon tends to hit some people more than others, but what makes it particularly perverse is when groups of people get involved. It's bad enough when one person gets all up in arms yak shaving, but when you try to get a group of people together, you're just as likely to end up giving the yak a manicure.

Which is why solo entrepreneurs and small organizations are so much more likely to get stuff done. They have fewer yaks to shave.

Don't go to Home Depot for the hose.

The minute you start walking down a path toward a yak shaving party, it's worth making a compromise. Doing it well now is much better than doing it perfectly later.

Where I work we tend to refer to yak shaving as "putting out fires", but regardless of the phrase I spend an incredible amount of time solving little problems in order to find solutions to the big ones. Often times we will intentionally break a large problem up into smaller ones just so that we can tackle it little bits at a time without getting overwhelmed by all the things that need done at any given time.

So, any other yak shavers out there?

If so, give a shout. I'd love to hear your yak shaving tales. 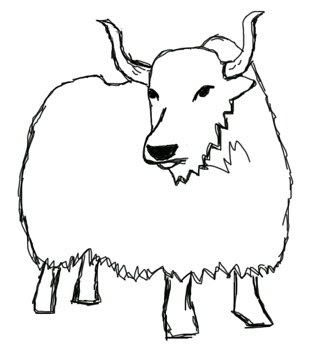