The Adventures of Friday the 13.

First of all some back story... Who would have dreamed that it would be so difficult to get American currency changed into Canadian currency in Southern Ohio??

In preparation for the RVCC Summer mission trip, the Youthworks staff has suggested that we get as much of our money changed to Canadian before we head into the great North. Local banks gave us very mixed responses about changing currency, which mostly went along the lines of "It is too much hassle, so we'd rather not".

After a failed run to the Columbus International Airport on Thursday... ( "I'm sorry, we just ran out of Canadian Currency"... doh! ) I called the 5/3 Bank currency exchange center at the Cincinnati Airport on Friday morning and was told that changing US currency to CN would be "no problem" even in large amounts.

I was at work on Friday morning, because things at work always tend to be a bit crazy when I'm going to be out of touch for any extended period of time. By the time I touched base with Cincinnati and decided they would be our best bet for currency exchange, it was already 11 AM.

Jenn was pretty tied up in Chillicothe for the afternoon, so I decided to make the trek to Cinci solo, despite it being a crazy boring drive and at the minimum a four hour round trip. 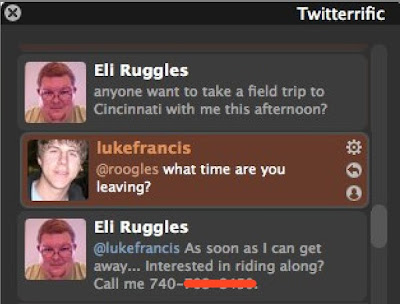 I wrapped up at work, managed to split by 12:45 and met up with Luke at RVCC.

That's when the real adventure began...

The drive across The App was relatively uneventful as far as drives go. Luke and I haven't had a lot of opportunity to hang out prior to yesterday, so the round trip to Cinci gave us an opportunity for epic conversation.

Down 32, around 275, enter Kentucky, nearing the air port.... no problems! Then BOOM! Crazy pouring rain started pounding on us, causing some quick brake application and the engaging of the windshield wipers. Well, that worked OK, until the passenger windshield wiper pealed off of the arm and started flopping around in a very dramatic way.

Thankfully the downpour was quick, and we made it into the airport parking garage safely.

Quick park, quick walk, right up to the counter at the 5/3 Bank.

"Hi, we would like to change some currency to Canadian."

"No problem, are you the guy who has been calling all day?"

Reassuring smile to persuade that I'm not a crazy person... "Yep that would be me".

Ten minutes later Luke and I were standing back at the van packing a large envelope of Canadian currency... It struck me as amazing that several days of stress had culminated in a less than 10 minute extremely painless experience, that was obviously no big deal at all for the girl behind the counter.

The exchange rate was $1.05 US to $1.00 Canadian. We started with almost $1200.00 American ( almost entirely collected from Youth going on the trip, who wanted their spending money changed ahead of time) and ended up with $1140.00 in pastel pink and blue bills.

Oh yeah, we managed to re-affix the errant windshield wiper and pull back onto the highway.

We had pre-decided that it would make no sense at all to visit Cinci without having Skyline Chilli. ( An obvious conclusion, I think anyone could agree ). Now that our main objective for the trip had concluded, our secondary objective [Destination SkyLine] was in high order.

No problem.
Punch up the NUVI.
Nearest Skyline, 3.2 miles.
Go there!

The NUVI, I've noticed since we've had it, really doesn't care how crazy or indirect the route is to get your from point A to point B. It has never really failed in getting me where I was headed though, so I tend to just trust it and move on.

An immediate turn off of the highway, and a crazy, curvy, steep, road through the woods brought us to a stop sign.

The NUVI says "Proceed 300 feet and board ferry". 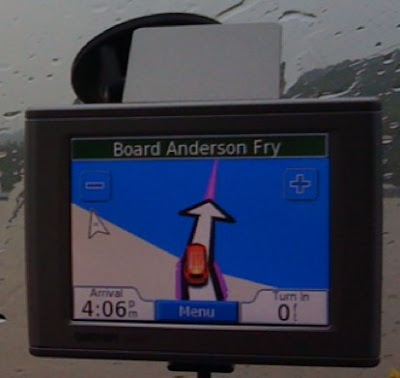 Who knew that you could cross the Ohio River on a ferry? Luke and I certainly didn't know it was an option until yesterday.

Here are some other iPhone shots of our experience... 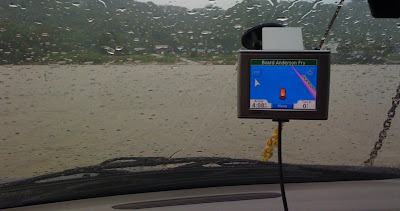 Although extremely cool, the ferry crossing was pretty uneventful. The lady in the car next to us was obviously a regular ferry rider and looked quite bored as she relaxed during the crossing. We surmised that she was probably on her way home from work.

Quick gas station stop. Skyline was right where the NUVI predicted it would be.

Half-a-dozen conies, a large three-way, an order of fries, and a few sweat teas later we were both quite content and ready to head back home.

The entire ride was filled with great conversation, and trying to get from the out of the way Skyline back onto the NUVI's recommended route home proved a little distracting to me. I missed several of our turns heading out of Cincinnati, but we eventually found our way back to route 32.

Traffic leaving Cinci was crazy around 5:30 on Friday afternoon, but great conversation prevailed as we made it back into familiar territory.

We tried stopping at the Starbucks in Batavia, but lack of electricity stopped them from being able to serve anything. A few miles later we tried a McDonalds to get a couple of coffees, but brewing a small, black, decaf proved too much for them and after having us "pull up to the curb", so they could bring it out, Luke finally had to go inside to track his coffee down.

We pulled back into RVCC a little after 8PM.

It was a great day, a grand adventure, phenomenal conversation, and a fantastic way to spend a Friday afternoon.

Luke, thanks dude for keeping me company, for the conversation, and going along for the ride.
Posted by Roogles at 7:08 AM

That was hillarious! I love an adventerous road trip!

So, is sweet tea common up there? I've always been under the impression it was strictly a southern thing. We have it everywhere down south.