Well... the rest of the day was a crazy blur, pretty much like I predicted...

At 3 (ish) Jenn took off from the convention center to find us some milk and take more bags of our "stuff" back to the hotel. I feel like we could start a Youth Ministry library with all the books we've carted back from the convention. To make that funnier, I procrastinated in buying some books today until there were none left, so I was able to order them at the show price and have them shipped to me... At least we won't have to find room for them in the car.

I helped Alan & Ed pack up the LW booth, and get it loaded up into Ed's van. By the time we were done with that we were all thinking dinner, so Jenn met us over at Ted's again for a sit down meal ( probably the last one in Atlanta ).

We shared the shrimp appetizer again, and I had a cup of the bison chilli. I also had a bison burger, and onion rings. All tasted good, sweet tea got an A+ again.

Because of the crazy downtown crowd this afternoon ( Falcons at the Georgia Dome, 5000 Youth Workers in town, and a Police concert at the Tabernacle ) we had to wait about 45 minutes for a table at Ted's. So by the time we ate, it was time to book it back down to the convention center for the 8PM General Session.

On the way in to find seats we bumped into Carol again, and got the great opportunity to hang out with her the rest of the evening.

Lost & Found, Bob Stromberg, and Skit Guys all got to play a "warm up" act in the general session. A teaser for the Late Night, if you will.

Worship with Leland was good. I think they might be growing on me.

The speaker at the general session was Marquis Laughlin.

Marquis recites the Bible, from memory, as performance art. Tonight he shared with us Genesis chapter 12 through chapter 22. The story of Abraham. It was awesome!

As Marquis was getting ready to go on, Jenn and Alan slipped up to the Thomas Merton theatre to get some seats for the Late Night. The Skit Guys are some of Jenn's favorite people, and she is being totally honest when she says that the Skit Guys and Lost & Found tonight at the Late night were the highlight of her weekend.

The show was fantastic! Afterward we got to hang out with Tommy & Eddie for a little bit. I absolutely love these guys! Not only are they hilarious, but they are genuinely great guys who really love God and love what they do. 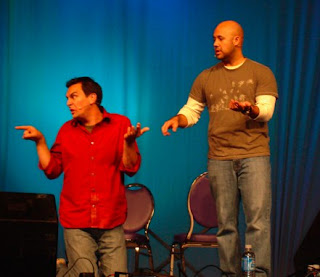 It's now 10 till 2. Jenn really wants to attend an 8 AM Seminar, and among the other things happening in the morning we need to pack up and move out of the hotel, buy our CD's and DVD's from the conference, buy the last couple materials we wanted from the YS Store, attend the closing general session, and prep for the 10 1/2 hour drive home.

Going to be a short night I'm afraid.

I suspect no more blogging until we get back home to Ohio... I will post a Monday wrap up and an overall take on the weekend once we are settled safely back at home.
Posted by Roogles at 1:37 AM

Have a safe trip home!

I have a blog now. so check er out.
im glad you and jen had a fun trip.
i loved my call on my birthday