What a day this has been...

I took the day off today because I though it might be good for my mental health to have two four-day work weeks with a four-day weekend in between.

Our plan had been to get up early, and leave for Columbus by 9:00 AM. We didn't exactly get the start we wanted, but the business of the day made up for it in leaps and bounds.

By 10:30 or so we were on the road. We hit Polaris first for some places Jenn wanted to check out, and Ellie played on the most excellent playground in the mall while Jenn was doing her shopping and Silas was sleeping in the stroller.

We made our way from Polaris to Easton around 1-ish, and after hitting Target, Bath & Body Works, Old Navy, and Dick's Sporting Goods we grabbed a late lunch at Cosi. Great sandwiches if you ever get to check them out! While Jenn and Ellie wandered around to other stores at Easton, I spent most of our visit there in the Apple store, trying to decide what new gadgets and mac accessories I couldn't live without. Bumped into Huss while we were there, as he had just wrapped up an appointment in Columbus and was doing a little Mac accesorizing himself.

Knowing that we were going to run late, we made a mad dash from Easton straight to Jackson for the Waverly Jackson game tonight, where the home-town Tigers proceeded to stomp the IronMen flat into their pretty field.

Had a great time hanging at the game with Jodi, Ed Purpero, and Chris & Tesa. Also great to have so many of the kids from Youth acknowledge us old people as being their friends even in a public setting like a football game.

It's 12:30 AM now. I'm back in my recliner while the rest of the family is asleep. I won't go into detail about all of the crazy stuff we packed back from our one-day shopping spree, but among the spoils was a six dollar and fifty cent "dog" tent that we found on the clearance rack at Target. The provided photo, is the current view from my recliner. 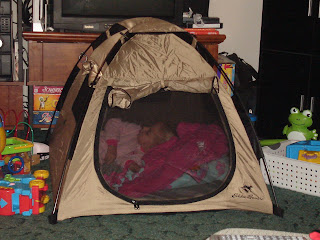 As far as Ellie is concerned it was the best $6.50 we spent all day.