Hiding behind the wall. 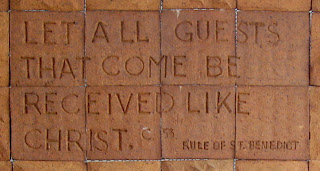 In the spring of 1848 fourty-four trappist monks left the Abbey of Melleray in Western France and traveled on foot, by boat, and later by covered wagon to a small farm outside of Bardstown, Kentucky.

This quote by Father Matthew Kelty (one of the monks at Gethsemani) still gives me chills.

"It's bad enough that we make cheese and fruitcake for the Kingdom of God, we do worse that that. We sing. We've been doing it since we got here. They got here late in the afternoon of December 21, 1848. Next day they began. December the 22, and it's never stopped. Day by day, week by week, year by year, until the end. In a wild, sordid, noisy, violent world we sing."

According to the Rule of St Benedict guest are to welcomed at the Abbey and are to be received "as Christ Himself".

On April 30, 2007 Steve and I made our way to Gethsemani to participate in a one week "Silent Retreat".

This coming Sunday (June 17) I will be sharing about our experience at the Abbey, and the impact that it had on me personally.

The following are some random observations, quotes, and things that I plan to bring up on Sunday...


"We don't put up walls to keep the people out, we put up the wall to keep the noise out."
-Brother Christian (GuestMaster)

What would be different if I could make regular time for just me and God?

What am I doing to keep the noise level down in my own life?

If we are to live balanced Christian lives, out here in the real world, how can we expect to do so unless we also have this balance of prayer, "real life", and pursuit of spirituality?

The life of a monk is simply an exaggeration of these three principles, which we all need to keep balanced.


In her book The Abbey of Gethsemani - Place of Peace and Paradox, Dianne Aprile writes...

"Monks are no better at this process, no better at praying and loving, than other other man or woman. But the monastic life gives them the structure, support, and encouragement to keep it up even when they fail. And they do".

And another quote by Brother Christian...

"We don't just pray when we FEEL like it. It is a constant. We put ourselves in God's presence no matter what we feel like."

A couple of my thoughts...

What would it be like if we, as a community of believers, provided for one another such a structure of support, prayer, encouragement, and love (even when fail, and we will) that we lived in God's presence all of the time whether we feel like being there or not?


The last couple of things I'm hoping to do on Sunday are (1) dispell some of the myths about what "silent retreat" actually means... I was there with Steve after all... and (2) share some entries from my journal describing how I felt leading up to, during, and near the end of our time at Gethsemani.


I've rambled long enough this morning... If there are any specific questions, thoughts, anything that you would like to know about our time there, please leave comments below so that I add them to my notes for Sunday.
Posted by Roogles at 8:03 AM

"We put ourselves in God's presence no matter what we feel like."

I find this statement amazing. What I've realized is, that even though I "know" about grace, I still don't feel like I'm always worthy to put myself in God's presence. 'Cause sometimes, I'm knee-deep in a bunch of crap ~ and I don't want to have to invite God down into the crap with me. He doesn't deserve that. And what's more, I don't feel I have the right to pull Him down in that muck with me.

I guess I need to work on that.